The future tenant of InfoGroup’s new investment in Miskolc will be a German automotive company, whose new warehouse hall, under construction on an area of 15 hectares, will be completed by late December 2017. In Tiszaújváros, InfoGroup will inaugurate the new warehouse hall, built on an area of 9 hectares, in the second quarter of 2018; this building will be occupied by an international electronics company.

BTS cooperation makes it possible for the partners to select the optimal location and the facilities are then constructed exactly in accordance with the users’ demands so it is possible to increase the functionality of the completed buildings and the efficiency of the work processes performed in them. “We satisfy tenant expectations of global companies both in Miskolc and in Tiszaújváros. What is more, we will also create new workplaces through the developments in a region that has an excellent road network but which is under-developed regarding logistics properties,” said Ádám Székely, Managing Director of InfoGroup.

As for the location, both developments boast with outstanding features as there are several international transportation routes running nearby, such as the Pan-European transport corridor no, 5, as well as the roads and railway lines of the Trans-European Transport Network (TENT-T, TINA).

The developments of InfoGroup will provide the customers with high standard logistics services.

From the aspect of the future tenants in Miskolc and Tiszaújváros, it is also important to mention the demographic conditions of the region: a population of nearly one million people can be reached by 30 minutes’ drive in the surrounding counties. Thanks to the investments, InfoGroup and the companies to settle down in the future can significantly improve employment in the North Hungarian region, characterised by unemployment rates exceeding the national average.

The logistics hall of 27,500 square metres, owned by InfoGroup and located in nearby Polgár Industrial Park, operates with 100% occupancy. Chosen as the Industrial Park of the Year in 2011, the Park can name such domestic and multinational companies as its tenants as Sona, Jabil or Toyota Tsusho, while Volvo and Gyermelyi have established their owned sites inside the Park and further areas are awaiting businesses wishing to settle there.

The preparatory works of the BTS projects in Miskolc and Tiszaújváros are well under way and construction will begin in the second quarter of 2017. “It is our goal to create buildings of outstanding quality not only by regional but also by national standards that satisfy all demands and help our customers to accomplish their business objectives,” said Managing Director Ádám Székely.

The Budapest Stand has become the focus of international attention at the most prestigious fair of the real estate industry, MIPIM, in Cannes, France.

The Budapest Stand was set up and organised jointly by the Municipality of Budapest, the Hungarian Investment Promotion Agency (HIPA) and the Real Estate Developers Roundtable Association (IFK). As a member of the latter, InfoGroup is also represented among the exhibitor.

During the real estate developer’s round table discussion held at the Budapest stand, managing director Ádám Székely emphasized that the year 2017 would be characterised for InfoGroup by the development of built-to-suit (BTS) projects. He announced that innovative industrial and logistics real estate projects and infrastructural and logistics developments would take place in Northern Hungary in the near future. In Miskolc a 21,500 sq m hall with an extension possibility of 50,000 sq m and in Tiszaújváros a hall of 18,000 sq m hall with an extension possibility of 18,000 sq m will be built tailored to individual needs and with flexible and efficient interior design. In both cases, the goal is to meet the rental needs of global companies. As a result of the developments, new jobs will be created in an underdeveloped region with an otherwise excellent road network. He added that the construction works of the new 24,000 sq m phase of the Bartók Udvar office building complex, which is rare to find in today’s office market, will begin in Budapest soon.

From now on InfoGroup awaits its customers in a more spacious, exquisite new office in Bartók Court office building. “The modern, environmentally friendly and outstandingly equipped new office is a decidedly favourable change regarding the comfort of both our colleagues and our customers. Establishing the new office, it was important that the final result should appropriately represent our commitment to innovative and high quality technical solutions to our customers. Accordingly, the interior designers placed great  emphasis on the unique appearance of the customer meeting rooms, the reception counter and the related lighting equipment. Moreover, it was also our aim that the office should provide an inspiring environment for the employees as well,” said Ádám Székely, General Manager of InfoGroup.

“With their cheerful colour schemes, the various community spaces (lounge, kitchen, dining room) serve as venues of recreation and informal conversations. My colleagues also played an active role in designing and creating the new office,” the General Manager added.

InfoGroup started as a family business in 1990 and it has stayed one till today: the founder-owner head of the family is now assisted by his two sons with the management of the enterprise, which has grown to be one of the most significant family-owned property development and investment companies in Hungary in the recent years. Two times Business Superbrands and MagyarBrands award winner, Infogroup is associated with such developments as Bartók Court building complex, Karcag Industrial Park, Polgár Industrial Park, selected as the Industrial Park of the Year 2011, and Polgár Logistics Centre, as well as the construction of thousands of apartments.

The latest development of the company group is Phase II of Bartók Court office building, which is expected to be opened in August, 2018. 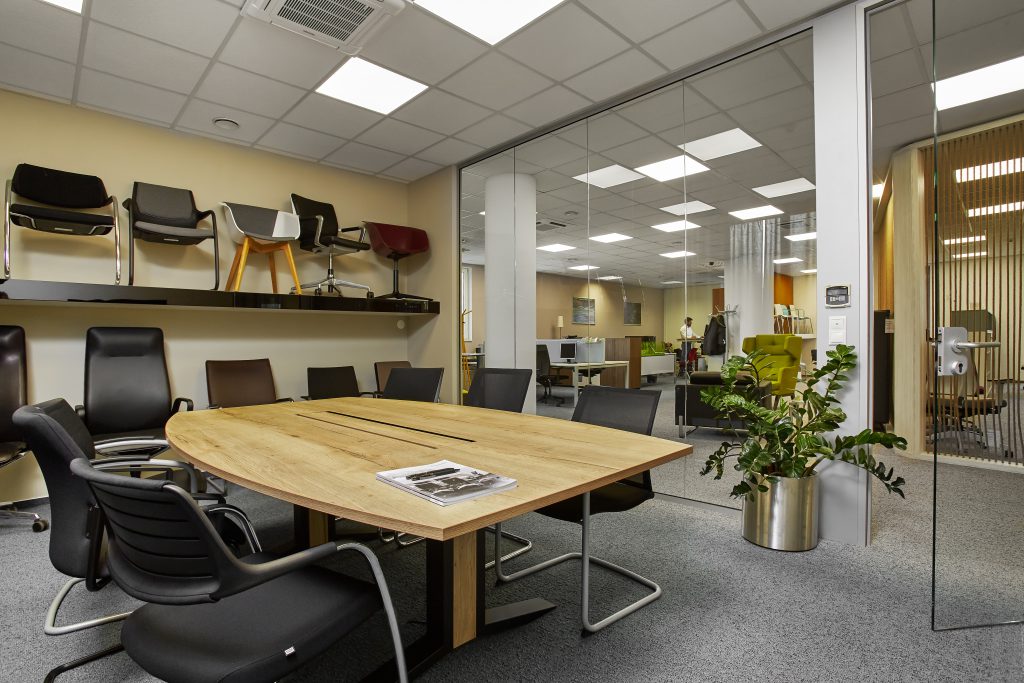 The Austrian manufacturer of office furniture, Neudoerfler has prolonged its contract and moved to a new and even more exquisite showroom and office in Bartók Court. The company already had its Hungarian seat in Bartók Court office building located in South Buda, which is soon to be expanded with a new phase. This move will now ensure them the venue for their successful operation for the long run.

Neudoerfler, renowned as the expert of multifunctional, ergonomic office furniture, as well as work space organisation and sound insulation, awaits its customers on 300 square metres in Building 1 in Bartók Court from mid-January 2017. Their newly leased area houses not only the offices but also a spacious and imposing showroom to cater for every need.

“We always try to keep one step ahead of the market with our products, not only dreaming but also producing tomorrow’s office furniture. As a dynamically developing office building that offers flexible solutions, Bartók Court excellently matches the values and image of our company. Based on our experiences over many years, the characteristics of the building maximally satisfy all our expectations regarding logistics and the infrastructure alike. After selecting the new location to lease, it was a smooth process to furnish the area and move in and our customers visiting us can also witness the advantages of the recreated showroom” says András Bradács, General Manager of Neudoerfler Office Systems Kft.

It became appropriate to move the Neudoerfler office because construction works on the second phase of Bartók Court are soon to begin in order to meet the steadily increasing demand for “A” category offices and the old building, where the company used to rent its premises, will be demolished. “It is a great pleasure that it was obvious for both InfoGroup and Neudoerfler to continue together in the future”, says Ádám Székely, General Manager of InfoGroup.

Location in South Buda: unmatched advantaged even on a national level

From the point of view of Neudoerfler, a company with its production base located in Burgenland, the proximity of the M1 motorway connecting the Hungarian capital with Austria is one of the key arguments for Bartók Court. Besides, it is highly appealing for all the tenants that the entry section of the M7 motorway starts in the close vicinity of the office building; it is easy to reach the M6 motorway, as well as M5, M3 and M2 motorways through the M0 ring road, while there is also fast and direct access to Liszt Ferenc International Airport.

It is good news for those arriving by private transport that the trams and buses leaving from Deák Ferenc Square, Óbuda and Móricz Zsigmond Circus stop immediately outside the building and the stations of the M4 metro line are within a few minutes’ walk. This means that Bartók Court Office Building can be reached from the city centre in as little as 15 minutes. Nearby Kelenföld Railway Station serves suburban and international trains alike and there is a P+R parking area next to it that can be used free of charge. In addition to good transport facilities, the popularity of Bartók Court is enhanced by the high standard of services inside the building and in the neighbourhood, as well as the educational and demographic figures of District 11. The office complex has been operating with excellent indicators since the beginning and its occupancy is nearly 100 percent at the moment. “Our tenants’ constant needs for expansion and the buoyant demand seen on the market prove that excellently located “A” category office buildings such as the new building of Bartók Court are highly sought after. In case of our new project, it is one of our priorities to construct an exquisite office building with outstanding standards of equipment and service packages, where the green and innovative solutions will serve the everyday comfort of our future tenants,” adds General Manager Ádám Székely.